The lower basin of the St. Johns River provides critical, year-round habitat for a large community of bottlenose dolphins.

UNF’s Dolphin Research Team conducts weekly surveys from the mouth of the St. Johns River in Mayport to downtown Jacksonville (~40 km upriver). On each survey, we attempt to document the identity, behavior and location of each dolphin sighted along the way. We have used the same systematic survey methods since March 2011, which enables us to make comparisons over time and detect changes in dolphin abundance and habitat use within our study area. 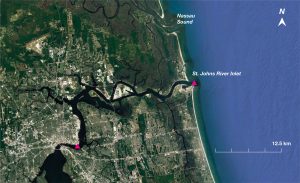 Individual dolphins are identified by the shape, notches and scar patterns on their dorsal fins; each fin is unique! This allows researchers to non-invasively track individuals over time. Our team has identified over 520 individual dolphins since March 2011, many of whom are sighted regularly within the St. Johns River.

Photo identification also enables us to determine maternal relationships non-invasively. Dolphin calves will swim in infant position with their mothers in order to nurse; if a calf is repeatedly photographed in infant position with the same adult, we can safely assume the adult is the mother of that calf. If the mother has additional calves in later years, we know that her calves are at least half-siblings. One of our most successful mothers is Athena; she's had five calves since we started our study in 2011.

Since March 2011, we have identified more than 520 individual dolphins in the river and approximately half of these are year-round residents. During the summer, the river experiences a large influx of dolphins who have spent the winter elsewhere. Summer is also the peak mating and birthing season. Our team monitors individual females to determine birth intervals and calf survival rates. On average, dolphin calves depend on their mothers for 3+ years.

Bottlenose dolphins live in fission-fusion societies, meaning that they join and leave groups on a frequent basis. Our research is examining how individual dolphins interact with one another and their environment.

Note: All research is conducted under authorization from NOAA Fisheries (GA LOC 14157 and Permit 18182) and UNF IACUC.